Just after 1900 my great-grandfather, Samuel Edwin Clarkson, moved from Arkansas to Oklahoma and established Oklahoma City Hardware.  He bought out another hardware concern and set up shop on Grand Ave in the young, but booming, city.  His brothers-in-law, Alfred Boyd and William H Vick, joined him in the business venture.  This article appeared in The Oklahoman (Oklahoma City) on the 10th of March 1907. Later the business left off the “City” and became Oklahoma Hardware Company, moving operations to a large, new warehouse building on East California Street.  The building still survives today in the center of Oklahoma City’s Bricktown revival district.  The ghost sign, Oklahoma Hardware Company, is still clearly readable on the side of the building.  It is listed on the National Historic Register. 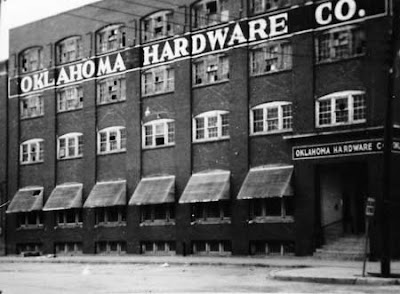 One of the strongest possible illustrations of the fact that Oklahoma City has a great commercial destiny is the large scale upon which some of the mercantile concerns of more recent establishment here have been founded.  A leader among them is the Oklahoma City Hardware Company, one of the largest wholesale concerns of the entire southwest.  It does a jobbing business exclusively and represents some of the largest and best known concerns in the country.  The house of this company occupies Nos 19 to 25 East Grand avenue, and has an extensive building.  It was first established in business in this city in 1900, and has been constantly growing ever since.  The company is incorporated and has a capital stock of $500,00 making it one of the strongest competitors for the hardware business of the entire southwest, thus aiding in making Oklahoma City the greatest distributing point in this section.

The large stocks carried by this company embrace everything in the hardware lines, especially including the materials and implements adaptable to the industries of the country.  The officers of the company are all capable and practical business men, progressive and modern in all of their methods, taking a lively interest in everything for the advancement of the material interests of the city and section.  They are Messrs. SE Clarkson, president and buyer; AW Boyd, vice president; WH Vick, secretary and treasurer.  The directors are WM Parker, WF Wilson, RA Clarkson, WH Vick, AW Boyd, SE Clarkson and Dennis T Flynn, all among the best known business men in this section.  The company employs a large number of experienced and efficient men, while the officers in charge of the establishment give their personal attention to the business and attend promptly to all orders.  This is especially one of the establishments which give credit to the city for doing business on a scale that entitles it to the name of a metropolis.


Far back in my Family Tree I come to my tenth great grandfather, Alexander Magruder.  I have not personally done research on him, but I have certainly enjoyed reading through some of the work that other family historians have done.  He was probably born sometime between 1600 and 1620 in Scotland and he appears in the records of Calvert county Maryland by 1652.  There’s lots of discussion as to his ancestors, and his wives, and that won’t be added to here.  This posting wants to look at his homeplace in Scotland, in Perthshire. 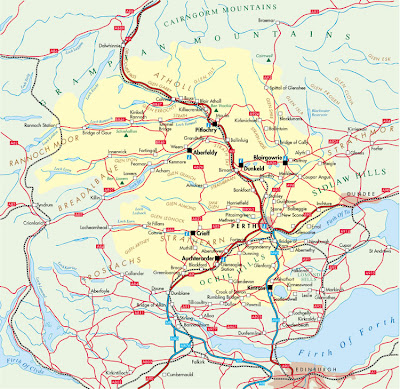 Our Alexander Magruder was probably born near the village of Bellyclone, in the parish of Madderty, in the county of Perth.   It is a short distance from the river Earn, and is designated in the district of Strathearn.  The Magruder ancestors are associated with the nearby village or parish of Muthill,  Perthshire, and earlier with the Glen Artney area to the west.   On this map Muthill stands in the southwest corner of Perthshire (yellow on the map).  Bellyclone,today  in private hands, does not appear, but a more detailed map shows it northeast of Muthill, nearer the town of Crieff.  The Magruders, and the related family of Drummond, are woven through the history of this little corner of Perthshire.

The National Gazetteer of Great Britain and Ireland, published in 1868 gives color to the Parish of Muthill. Resting on the Highland - Lowland border, ten miles in length and eight in breadth, the land along the rivers Earn and Allan is fertile for farming.   Higher up, sheep grazing is practiced.  The weather, cold and wet, is tolerably healthy.  Most of the parish belongs to the Drummond family, but there are five or six other resident landholders.   Drummond Castle,  “being built upon a rock, commands one of the most extensive prospects in Scotland.” 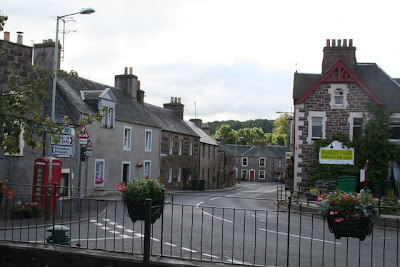 For the modern traveler, the Visit Scotland website  recommends that visitors to the Village of Muthill “can discover one of Perthshire's most unexpected jewels, Drummond Castle Gardens with its historic sundial. Literature lovers should travel east to Innerpeffray Library, the oldest surviving public library in Scotland.”  The Innerpeffray Library was established by the Drummond family in 1680.  At the center of the small town of Muthill are the imposing remains of the village church, built in the fifteenth century.  The ruins are under the care ofHistoric Scotland.  And, even more ancient are the nearby archaeological remains of Ardoch,  a Roman military camp, probably established around 80 ad.

Madderty parish is in the Strathern district of Perthshire, just a few miles north and east of Muthill parish.  In 1607 Madderty (Maderty) was given, by King James I, to the Drummond family, along with the title of Baron Maderty.  It contained the village of Bellyclone (Balliclone, Ballyclone), which many family historians claim as the birthplace of Alexander Magruder.  Today Bellyclone is a private family farm.  Susan T describes, on her Magruder Blog,  her visit there in 1999. Apparently, American Magruders had a plaque placed at the farm in 1975 and the owners anticipate “pilgrims”.

For more details on Alexander Magruder, visit his page at Family Stories, pamgarrett.com. 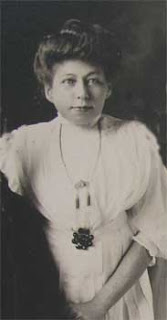 Henrietta Jeffries Clarkson was born 6 March 1873 in Washington county Missouri, third daughter of Richard Albert Clarkson and Elizabeth Jane Robinson.  She is my great-grand aunt.  She moved with her parents and three siblings to Fort Smith, Arkansas in 1887, when she was about age fourteen.  Etta Clarkson lived gracefully with “delicate” health, and a spinal disorder which caused minor disfigurement.  She was a cheerful servant to all around her.  Along with her mother, she served several charities and Christian missions.  She was a poetess and gifted china painter.  In 1910, she unexpectedly died during a visit to the families of her sisters and brother in Oklahoma City.  She was thirty-seven years old.

From the obituary of Henrietta Jeffries Clarkson, published in a Fort Smith Arkansas newspaper,  February 1910:

Words cannot tell the burden of sorrow which rests upon the hearts of her fond parents . . . She was the light of their home.  The only one left to cheer, to comfort and to help.  In her frail body was encased a great soul, a heart full of love and tenderness.  Her life was an unselfish one, beautiful in its simplicity, in its helpfulness, in its usefulness.  Her mind was well stored from wide reading of books and from observation and experience. She was a wise counselor and her opinions and advice always rang true. She was in deed and in truth a genuine Christian; no pretense, no show - pure and humble and true and faithful.  Her friends will miss her.  Her church will miss her.  In her [death] there is a void that can never be filled . . . to those who loved Miss Etta Clarkson there is left the rich consolation of a beautiful life, full of good deeds.  The hope of immortality which throws a beautiful light over the grave and gives abundant assurance of life eternal in the "house not made with hands", Our Father's house.

Henrietta Jeffries Clarkson was buried, along with other family members, in Oak Cemetery of Fort Smith, Arkansas.  Her grave marker appears in Find A Grave.  Several of her delightful letters are included in the Clarkson Family Letters at Family Stories, pamgarrett.com.
Posted by Pam Garrett 4 comments:

Email ThisBlogThis!Share to TwitterShare to FacebookShare to Pinterest
Labels: Clarkson


Greetings! I am delighted to have you visit my Family Stories Blog. My name is Pamela Sue Hutchison Garrett and I have been researching family history for more than thirty years now.  This Blog is a companion site to my family history database, Family Stories, pamgarrett.com.

I’ve had years now to observe people’s reactions when I say to them, “I have a passion for family history!”  If you speak these words to a like-minded soul, shared experience will tumble forth.  Speaking the same words to the uninitiated usually invites a few moments of polite conversation before moving on to other subjects.  That’s ok, because we all have different interests.   But, there is something about the stories, the family stories that can engage the non-genealogist.

This blog is primarily about the family stories.  Some of the stories come from first - hand accounts, diaries and letters. Others are more second – hand, extracted from biographies in county history books, or newspaper obituaries.  There will also be speculative stories interpreted from the social histories of time and place.  Along with the stories there will be plenty of photographs, a few travel-logs and mysteries, and suggestions for further reading.

As the Family Stories Blog begins the focus will be on my Clarkson family.  The ancestral families of Richard Albert Clarkson include Jeffries, Chinn, Bramham, Crittenden, Moxley, Consterdine, Anderton, and Clarkson. The ancestral families of his wife, Elizabeth Jane Robinson, include Edmonston, Royce, Van Lear, and Robinson.  Future expansions will look at: Hutchison, Tanner, Garrett, Svejkovsky, Fry, Rowland, Grant, Nichols, Lakin, Markham, Matthews, Fleming, Hutchins, Brooks and many others.

If you enjoy the stories and want to know more about how they relate to your own ancestral past, be sure to visit the family history database, Family Stories, pamgarrett.com.  There are many more stories available there, along with names, dates, documents, census records, deeds, Wills, cemetery records  . . .  (on and on) . . .

I have a passion for family history!!