Growing Up With Jasper Indiana: The Edmonston Family

In November 2012 I wrote a blog post titled Bazil Brooke Edmonston, Indiana Pioneer.  It gave of brief biographical account of my 5xgreat-grandfather, mentioning his move to Dubois county Indiana.  Now, almost a year later, I want to return to his story. 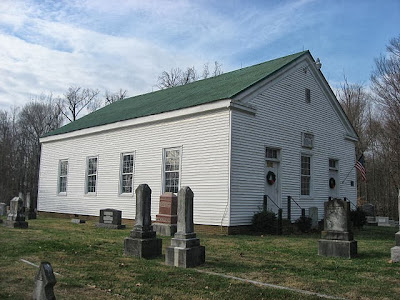 The town of Jasper was established in the mid 1820’s, and became the county seat for Dubois county in 1830.  Tradition suggests that the town name, Jasper, comes from Revelations 21:19, “and the foundations of the wall of the city were adorned with all manner of precious stones . . . the first foundation was of Jasper.”

The Edmonston family is frequently mentioned in George R Wilson’s, “History of Dubois County from Its Primitive Days to 1910”. According to Nancy Edmonston Weathers, "the first house erected in the original town of Jasper was built on lot 153, by B. B. Edmonston, Sr (her grandfather), about 1830 . . The house became the first post office at Jasper and its owner was the first postmaster. Mail then came from Vincennes and Paoli once a week.”  Nancy Edmonston Weathers was the daughter of Bazil B Edmonston jr.  She tells about her school room in the first Court House at Jasper, and the oxen teams that pulled goods between the towns of Troy and Jasper.

Besides being the first Postmaster of Jasper, Bazil B Edmonston (sr) served as Associate Judge and Probate Judge until his death in 1841.  According to George R Wilson, Col B B Edmondson (jr), namesake of his father, was “for a long time one of the most prominent officials of Dubois county. His hospitable home stood at the west end of Eighth street in the town of Jasper, and here he fed and housed hundreds of guests.

It is thought that most of the Edmonstons were Presbyterian, probably participating at the Shiloh Cumberland Presbyterian Church near Jasper.  Several members of the family are buried in the adjoining cemetery.  Wilson’s Dubois County history informs us:

Shiloh camp ground was for years a place of Protestant worship, and here gathered the Armstrongs, Alexanders, Andersons, Dillons, Stewarts, Normans, McMahans, Kelsoes, Roses, Brittains, and many other pioneer families from the northwest quarter of Dubois county. It is said that the most eloquent sermons of pioneer days were delivered at Shiloh. Log houses or huts were erected forming a hollow square, and in this square church services were held. This was long before a meeting-house had been
Erected . . Meeting House. The church edifice was built in 1849. A cemetery was started in what was once the hollow square, in 1860. Miss Minerva Edmonston, a daughter of Col. B. B. Edmonston, was the first to find a grave at Shiloh . . Protestants, strict in their church creed, both at Ireland and Jasper, favor Shiloh as a burial ground. Here lie the remains of many of the most prominent pioneer families associated with Jasper and Shiloh Cumberland Presbyterian Church.

More details on the Edmonston family, and their years in Dubois county Indiana, are available at Family Stories, pamgarrett.com.


Photo:  Shiloh Cumberland Presbyterian Church, southeast of Ireland in Dubois county Indiana.  Built in 1849, the church and cemetery are listed on the National Register of Historic Places.  Photo, by Nyttend, was submitted for use to Wikimedia Commons in 2011.