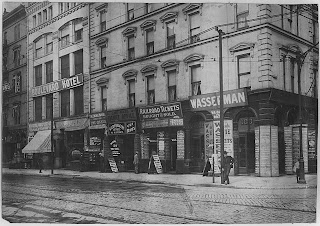 Julia Parkhurst Robinson, the fourth daughter of Preston McGready Robinson and Sarah Nugent  Edmonston, was born 17 January 1855 and lived out her childhood in Washington county Missouri.  She is my gg-grandaunt.  In 1876, when she was twenty-one years old she married James Paul Ward.  A few years later they are found in the 1880 census of Poplar Bluff in Butler county Missouri.  They added a little son Ivan Ward to their family.  James P Ward is shown as an engineer.  Shortly after the census was taken another son named Joseph Bartlett Ward is born.

According to Mamie Edmonston's 1948 letter, "They (James and Julia Ward) had two sons, Edward and Ivan.  Ivan, a very handsome young man, was murdered by a drunken miner while they were visiting once at my aunts."  I have not been able to find any evidence of a son Edward Ward.  He is not with his parents in either the 1880 or 1900 census.  Joseph Bartlett Ward lived to about the age of ten, dying in 1891.  He is buried with his parents in St Louis.  I wonder if he might be the "Edward" Ward of Mamie Edmonston's recollection.  The 1900 census shows Julia Ward with one of two children living, and this would be her son Ivan Ward. In the following year Ivan would also be gone.  I know very little about the murder of Ivan Ward.  I have come up with a newpaper clipping to substantiate Mamie Edmonston's comment.

Warsaw, Mo. - A man giving the name of L. F. Jackson, alias Charles Hicks, was arrested by authorities Saturday about five miles south at the Branstetier Ferry.  He answers the description of James Fatchett, who is wanted for the murder of Ivan Ward, committed at Irondale, Washington County, Mo., and is still at large and  $800.00 is offered for his capture.
[source]  The St. Louis Republic (St Louis Missouri), April 28, 1901

A followup places a James Fatchett in Washington county Missouri about this time and indicates that he died many years later, 1950 in Jefferson county Missouri. In October of 1901 the St Louis Republic announces changes to the Missouri National Guard, indicating "Ivan R Ward, killed by accident."  I would like to learn more about this "murder", a trial, and verdict.  This must have been a tremendous sadness in the life of our Robinson family.

During these years around the turn of the century, the Wards moved to St Louis where James P Ward is shown as a railroad contractor.  Sometime before 1920, probably at James P Ward's retirement, they returned to Washington county Missouri and settled into the old Robinson family homestead at Irondale.  Julia Robinson Ward died in 1935 and James P Ward died in 1940.  They are buried with their sons in St Matthew Cemetery in St Louis Missouri.