James Jones married Phebe Mouser on the 14th of February 1850.  We don’t know anything about the wedding ceremony, but it may have taken place in the Mouser home, near Rocky Mound in Hempstead county Arkansas.  The little community where the Mousers lived no longer appears on modern maps.  But, in its day, Rocky Mound sat about four miles east of the town of Hope in the southwestern corner of Arkansas.

Did the young couple purposefully choose a Valentine’s Day wedding?   In 1850, the 14th of February fell on a Thursday.  It was not uncommon during this period to have a “weekday” wedding.  In the mid-nineteenth century wedding traditions were shifting from a church ceremony, to a more intimate gathering in the bride’s family home.  Weddings were often held in the morning, and were followed by a breakfast for the guests.

But, what of the Valentine’s Day connection?   The origin of Valentine’s Day is probably related to a St Valentine who was celebrated on the Catholic liturgical calendar on the 14th of February.  In the fourteenth century, Geoffrey Chaucer was the first to link the Christian feast day to romantic love, by the writing of a poem.  Gradually the practice of exchanging cards and gifts grew up around the feast day.  By the 18th century, traditions of homemade cards with lace, ribbons, cupids, and hearts were popular in England.  America followed after.

Only a few years before the Jones and Mouser wedding a new epoch in Valentine’s Day celebrations had begun.  In 1847, Esther Howland, a young woman in Worcester Massachusetts, began a business of mass producing Valentine cards.  The story goes that Esther, inspired by a lovely valentine card she had received from England, began a “cottage industry”.  Her father, a prominent stationer in Worcester, was able to import supplies of paper lace, ribbon and decorations, and her brother was her first salesman.  The business, under her direction for almost thirty-five years, proved wildly successful.

It is satisfying to think that James and Phoebe chose the “traditional day of romance” for their wedding.  The surging popularity of the holiday around 1850, suggests this as a real possibility.  But, whether true or not, the day was likely filled with wishes for love and happiness from their family and friends.

When Joshua Fry removed from England to America in the 1720s, he settled himself in the bustling town of Williamsburg Virginia.  In short order he took up the position of Master of the Grammar School at the College of William and Mary.  Whether he came to Virginia for that specific purpose, or received the appointment after his arrival is unknown.  For a single young man in his twenties, with considerable energy and industry, this was an opportunity.  Eighteenth century teachers were noted with respect in a community.

The College of William and Mary had been opened in 1694, after years of dreaming and preparation by its founders.  The Rev James Blair held the position of President, from the founding until his death in 1743. The initial plans for the college called for “a college president and six masters or professors”.   Five of the masters would lead classes in Greek and Latin (the grammar school), mathematics, moral philosophy, and divinity.  The sixth master would head a separate school  “for the instruction and conversion of the Indians”.  For the first thirty-five years, the grammar school was the center of the college, usually serving from twenty to forty students.  The upper divisions of the college were spare in both students and faculty.

The year 1729 was pivotal in the life of William and Mary College.  By former agreement, the direction of the college was transferred from the hands of eighteen trustees to the faculty itself.  A full faculty was functioning by that time, and, according to the record, “Joshua Fry, a gentleman of Williamsburg, was appointed master of the grammar school, which was early established ‘for the immediate education of the youth of the colony in the Latin and Greek tongues.’”  We know, by a deed of 1726, that Joshua Fry was already serving as master at the college at that time, so it is likely that he headed the grammar school for at least five years, until 1731.

The chief aim of the grammar school was to instruct young boys in Latin and Greek, in preparation for entrance into the School of Philosophy.  A proficiency in Latin and Greek was necessary, as most textbooks of the day were written in those ancient languages.  As the eighteenth century moved towards its mid-point, more texts were being developed in English.

Before entering the grammar school at about age twelve, a boy had to be able to read, write, and understand simple arithmetic, and the basics of language.  If the number of students was large, the schoolmaster was assisted by an usher (under-teacher).  The grammar school course was studied over a term of three or four years, and besides languages, included mathematics, writing, and exercises in logic.  The school master also gave regular instruction in the catechism of the established church, and attended twice daily chapel, and all meals with his students.

An earlier William and Mary Grammar School master, Mungo Ingles, described a typical day in the classroom, in a letter of 1704:

It is nothing to be (all ye year long except in ye breaking up) Confin'd to College from 7 to 11 in the morning; & from 2 to 6 in the afternoon, and to be all day long spending ones Lungs upon a Compa. of children, who (many of them) must be taught ye same things many times over.

Today, Colonial Williamsburg preserves several rooms of the old Wren Building at William and Mary College in their colonial appearance.  The Grammar School classroom, which sits just to the north of the main entrance, is one of those rooms.  I had the opportunity to visit the room in the 1990’s.  What fun to sit upon one of the classroom benches, and imagine my great-grandfather at the head of the class!

In 1731, Joshua Fry left the Grammar School to become the college’s Master of Natural Philosophy.  This likely suited him well.  In basic form, Natural Philosophy was the study of the “workings of nature”.  Individuals had long studied the natural world, but in the mid eighteenth century, it was still a fairly new topic of study in the classroom.  At William and Mary College it probably included physics, astronomy, and mathematics.

One of Fry’s predecessors at the college, Rev Hugh Jones, had proposed in 1722, that William and Mary College serve as a “training school for the civil service of the colony.”  This was a revolutionary idea.  He suggested that county clerks, assessors, and surveyors might be trained, and then appointed by the college.  It is not clear that such a plan was adopted by the college at that time, but it seems reasonable that Joshua Fry, during his time at William and Mary College, trained many young men in the craft of surveying.  By the latter half of the eighteenth century county surveyors were appointed by the governor, “after a candidate had been examined and approved by the faculty of the College of William & Mary.”

It is not certain exactly what year Joshua Fry left his work at the college to pursue new things.  It was probably sometime between 1732 – 1737.  He had led a bachelor’s life for many years, and at about the age of thirty-five, he was ready for a wife and family.  Sometime between 1734-1736, he married Mary Micou, the daughter of Dr Paul Micou, and the wealthy widow of Leonard Hill.  Joshua Fry, in the twenty years that followed, accomplished extraordinary things.

As surveyor, map-maker, explorer, husband, father, burgess, and head of the Virginia forces during the French and Indian War, he demonstrated that his years as schoolmaster at William and Mary College could be practically applied to a rich and full life.


For more details on Joshua Fry, visit his page at Family Stories, pamgarrett.com.

Further Reading:
Colonial Williamsburg
Colonial Williamsburg Foundation Library Research Report Series – The College of William and Mary, by Mary Goodwin, 1967.
The Development of a Curriculum in the Early American Colleges; Joe W Kraus; published in the History of Education Quarterly, Vol 1, No 2, June 1961.
Posted by Pam Garrett No comments: 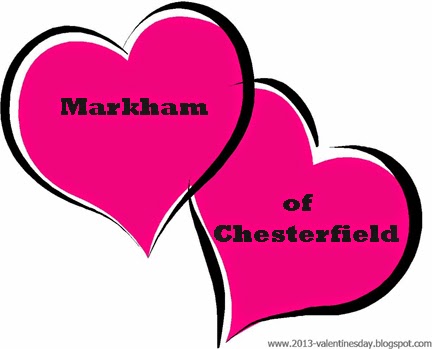 After a generous year’s work, I finally have a new genealogy website up and running – Markham of Chesterfield.  It is a project that has been long on my heart.  It tells the story of my 6xgreat-grandfather, John Markham of Chesterfield county Virginia, his ancestors and descendants.  John Markham was born in county Kilkenny Ireland, just after the opening of the Eighteenth Century.  As a young man, about 1730 – 1735, he immigrated to America, settling first in Orange county New York, and eventually moving his large family to Chesterfield county Virginia.  I have been researching and gathering stories on the Markham family for thirty-five years.

In December 2013 I determined to set aside work on the Family Stories website and blog until I could complete my Markham project, and get it up onto the web.  I hoped for a four to six month hiatus.  But, as those things go – here I am, almost fourteen months later – ready to return to my Family Stories project.  I look forward to picking up where I left off – with some accounts of my Fry and Tanner families.

I would love to have you visit at my new Markham of Chesterfield website.  I have also made some recent additions on the Van Lear family at the Family Stories, pamgarrett.com website.  To help place the Van Lears on the family tree - Jane Van Lear and her husband Archibald Robinson are the grandparents of Elizabeth Robinson Clarkson.