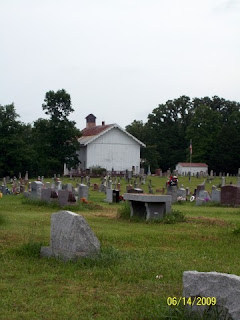 Martha Thomas Robinson was born on the 13th of November 1852 in Washington county Missouri.  She was the third daughter of Preston McGready Robinson and Sarah Nugent Edmondston, and my gg-grandaunt.  Just before her 20th birthday, in 1872, she was married to Newton Jasper Thompson, and they settled near their parents in Concord township, Washington county Missouri.  Their farm was probably outside of the town of Irondale, and they appear in Concord township in the 1900, 1910 and 1920 census.

Newton Thompson and Martha Robinson were the parents of nine children, including a set of twins.  Six or seven of their sons, and one daughter, lived to adulthood.  The children probably attended local schools in Irondale and participated in the family farming operations.

Newton Thompson and his wife Martha both survived into their seventies, Newton dying in 1921 and Martha in 1929.  They are buried with many extended family members in Hopewell Cemetery in Washington county Missouri. 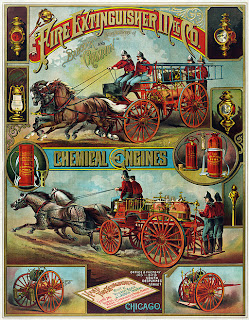 In the 1880 census of Washington county Missouri, Robert Bebee was noted as a Forman at the Pilot Knob furnace.   He and his wife, Mary Alice Robinson, were the parents of six children, three of whom died in childhood.

Sometime in the 1890’s, the Bebee family removed to St Louis where Robert Bebee took employment with the St Louis Fire Department.  He was a ladderman at Engine House #32, Hook and Ladder Company 8.  A Fire Department record indicates that he died in service 13 May 1902, but his tombstone gives his death date as 13 March 1903.

Gould’s Blue Book of St Louis, 1903 and 1907, gives the Bebee home address as 6718 Virginia Avenue.  By 1910 Mary A Bebee, widow, is living with two of her grown children in St Louis.  A cousin, Mamie Edmonston in her 1948 letter describes Mary Alice as "one of the most ladylike and gracious women I have ever known."

Mary Alice Robinson Bebee died in 1923.  She is buried with her husband in Saint Matthew Cemetery of Saint Louis, Missouri.

Further Reading:
History of the St. Louis Fire Department, with a review of great fires and sidelights upon the methods of fire-fighting from ancient to modern times, from which the lesson of the vast importance of having efficient firemen may be drawn. St. Louis Firemen's Fund.(St. Louis: Central Publishing Company, 1914).
A copy of this item is located at the Central Library, St Louis Public Library (ST 352.3). 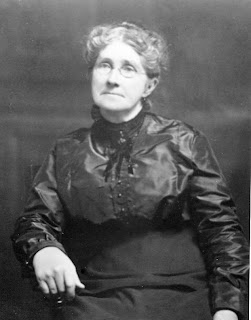 Elizabeth Jane Robinson was my gg-grandmother.  She was born on the 11th of January 1848 in Washington county Missouri.  She was the first born child of Preston McGready Robinson and Sarah Nugent Edmonston, and she was the first of a family of five daughters.  In fairly quick succession would arrive her younger sisters, Mary, Martha, Julia and finally Joeannah in 1862.

I don’t know much of my gg-grandmother’s childhood, but it appears that she grew up on a family farm near the communities of Caledonia and Irondale in Washington county Missouri.  I can only speculate on the schooling of Elizabeth Robinson and her sisters, but it is clear that they received a worthwhile education.  Whether it was at home, in a local schoolroom, or at a boarding school is not known.

“Lizzie” Jane Robinson married Richard Albert “RA” Clarkson on the 3rd of September 1868.  He hailed from Essex county Virginia, had been orphaned as a young boy, and came west with his uncle a year or two after the Civil War.  He must have married Lizzie Jane not long after his arrival.  They appear with their infant daughter Camilla Clarkson in the 1870 Census of Washington county Missouri, in Harmony/Osage township.  RA Clarkson is noted as a Retail Dry Goods Merchant, a business he carried on through most of his life.  The town of Annapolis, in neighboring Iron county Missouri, was established in 1872, and RA Clarkson is listed among the first residents.  Lizzie Robinson and RA Clarkson lived in Annapolis for fifteen years.  Their four children were born there.

Our family is most fortunate to have a large collection of letters exchanged by our Clarkson family.  The largest portion of the letters is written between RA Clarkson and two of his children, Henrietta Clarkson and Samuel Edwin Clarkson, between 1903 and 1913.  But, there are a few earlier letters, and several letters written by Lizzie Jane Robinson Clarkson.   In May of 1886, Henrietta Clarkson writes to her two older sisters, Cammie and Annie, who are likely away at boarding school.  She mentions the chicken and dumplings they had for dinner, and the “train wreck” Papa met up with when he was returning from Ironton.  Also enclosed in the envelope is a letter from Mama (Lizzie Jane) to her daughter Cammie.  It’s an odd and hurried letter, discussing dresses that the girls are in need of.  Lizzie offers to purchase fabric in St Louis to send on to their dressmaker, if the girls will make clear what they need.  She closes the missive:

I do hope you are not just wanting these things to make a show, but if necessary then I will try and get. Now don’t go to crying and fretting over it just write on receipt of this a few lines telling me what you know, what color of silk and fingered or not. I do hope the Good Lord will forgive me for spending my Sabbath evening thinking about dress.

Just after this 1886 letter, the Clarkson family moved to Fort Smith Arkansas.  This would be Lizzie Robinson Clarkson’s home for the next forty-five years.  She became involved in many ministries of the Presbyterian Church.  She worked with a group of women to establish the Rosalie Tilles Orphan’s Home in Fort Smith.

Elizabeth Jane Robinson was described by her granddaughter Elizabeth Boyd Reynolds in a letter to Charles Ninian Edmonston. She called her a colorful person who for many years supervised, from her home, a Ft. Smith orphanage, much to the dismay of her family.   She always drove a black horse hitched to a phaeton, wore sweeping skirts and a little bonnet on her head long after hats were in vogue.  She would stop her horse anywhere in the middle of the street to visit, much to the despair of the merchants, who finally wrote to the family to please keep her off the street before she was run over.  She was a large, strong woman both physically and mentally . Elizabeth claimed to be "scared to death of her" but said her younger sister Henrietta constantly chided her for not "kidding her along" as she did.

Elizabeth Jane Robinson Clarkson died in 1930, at the age of eighty-two.  She had faced the death of her husband and two of her daughters, and a young grandson.  She is buried with her family in the Oak Cemetery in Fort Smith Arkansas. 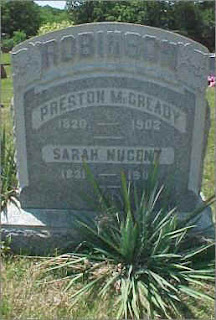 The Robinson’s migration followed a few years after a group of mostly Scots – Irish families left Kentucky to settle the Bellevue Valley of Missouri and establish the little town of Caledonia.  The first lots were auctioned in Caledonia in 1819.  It isn’t clear whether the Robinsons set up housekeeping in the new town, or on a farm outside of town.  But, they must have played a role in the growth of a brand new community.  Today Caledonia is a small village in Washington county Missouri, but it is noted for its Nineteenth century charm, with thirty-three homes and buildings on the National Historic Register.

Preston McGready Robinson, was married on 2 November 1847 in Washington county Missouri to Sarah Nugent Edmonston, daughter of William Edmonston and Elizabeth Royse of adjoining Reynolds county Missouri.  She was born 12 November 1831 in McComb, Illinois.  Preston was twenty-six years old and Sarah sixteen!  They were married by John Thomas, preacher of the Methodist Episcopal Church.  The witnesses to their marriage included Sarah’s brother, John Edmons(t)on, and Preston’s sister, Elizabeth Robinson.

The 1850 Census of Washington county Missouri, Belleview township, page 109, consecutively lists three young families – Richard and Elizabeth (Robinson) Terrill, Preston and Sarah Robinson, and Samuel and Jane (Robinson) Reyburn.  The father of these siblings, Archibald Robinson, is also in Belleview township, on page 117.  It would be interesting to know the location of this "family" homestead.

Minimal record searching does not yet tell us much about what Preston Robinson did for a living, but in census records he is shown as farmer and planter.  The few deeds I have read show him selling parcels of land, probably inherited from his father Archibald Robinson, though there are some buying and selling transactions he may have initiated himself.

Probably Sarah Edmondston Robinson was responsible for the education received by these five daughters.  Eldest daughter Elizabeth Jane Robinson was obviously intelligent, and a good business-woman in her later years.

Southeast Missouri was not a major player in the action of the Civil War, but it did see both Union and Confederate troops moving through.  There was probably more fear stirred, and more property damaged by the Northern Jayhawkers and Southern Bushwhackers, local outlaws with personal grudges.  In 1864, Confederate General Sterling Price drove his men across Missouri in an event known as Price’s Raid.  The Battle of Pilot Knob occurred on 27 September 1864, when Price’s 12,000 troops faced a small garrison at Fort Davidson.  If our Robinson family was “at home”, they may have been aroused by this battle in the neighborhood.

One final postscript to the seemingly admirable life of Preston McGready Robinson is a 1902 letter written by Richard Albert Clarkson, Preston Robinson's son-in-law, to his cousin Richard Mundie, which says:

Mr. Robinson, my wife's father has a tumor on his hand which they fear is a cancer.  The poor man cannot live much longer and the unfortunate part of it all is he is unprepared as we fear, for death.  The drink habit fastened itself upon him years ago and it has sapped his manhood.  Poor fellow, how I pity him.

Preston Robinson died on 1 July 1903, at the age of eighty-three, and is buried in Hopewell Cemetery at Irondale in Washington county Missouri.  His obituary tell us, “About two months ago, he accepted Christ as his Saviour, and gave every evidence of being ready and waiting, simply trusting and with patience he calmly awaited the summons 'come up higher’. “ It credits him with twenty-six grandchildren and eight great-grandchildren.


More Reading:
There is an article available on the internet, written by Thomas Flanders, published in the Spring 1992 issue of Ozarks Watch, and titled Kith and Kin of Caledonia.  It doesn’t include any mention of our Robinson family, but it gives a nice flavor to the community in which they lived.