It is hard to say just when James Clarkson first donned his “Redcoat”, to join the 54th British Regiment of Foot.  He must have been a young man in his early twenties.  Already trained as a weaver by his father, Peter Clarkson, James’s was leaving behind his parents and siblings in the little town of Blackley, outside of Manchester England. 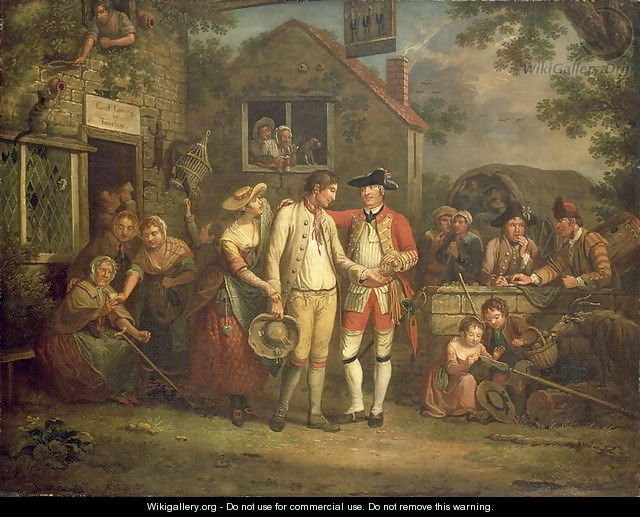 What drew him to the military life?  In the early 1770s most British soldiers were volunteers, signing on for a career rather than a fixed-term commitment.  Whether James Clarkson was seeking stable employment, or an adventurous interlude, we really cannot say.  It seems likely that James Clarkson was recruited around Manchester, and shortly sent across the Irish Sea to Cork.

The first clear record that we have of James Clarkson is the muster role in Cork Ireland, dated 5th August 1774.  He was a member of George Ridsdale’s Company of the 54th Regiment of Foot.  There are some “lingering questions” related to an earlier James Clarkson in this regiment.  The port city of Cork was a busy commercial location in the 1770’s.  It served as a training and provisioning site for the British military.  Cork became home-base to James Clarkson for several years.  Soldiering life in Ireland probably did not satisfy any pent up longing for adventure.  According to newspapers of the time, the garrison kept busy guarding the local goal, and shooting off canons in honor of every royal birthday that appeared on the calendar.  James Clarkson did have the opportunity to move out to other port cities in Ireland; Dingle in July 1775, and Carrick on Shannon in October of that same year.

Finally, in January of 1776 James Clarkson found himself aboard the “Lord North”, preparing to sail with John Breese’s company (54th Regiment of Foot) to the American colonies to “subdue the rebellion”.   After a storm ravaged crossing of eight weeks or more, John Breese’s company arrived at Cape Fear on the North Carolina coast in the spring of 1776.  They encamped for several weeks before resuming ship and sailing south toward Charleston South Carolina.  They attempted to fire on the partially completed fort that guarded Charleston harbor, but several factors worked against their success, and British forces eventually withdrew.

On the 11th of August 1776, James Clarkson’s name appears with John Breese’s Company (54th Regiment of Foot) at Staten Island New York.  He was among 32,000 British troops that were occupying the small island, and preparing for battle.  A few days later, August 27-28, the 54th Regiment of Foot participated in the Battle of Brooklyn.  Through a series of assaults, they were able to push back the troops led by General George Washington until the rebel troops were trapped in the Brooklyn Heights area.  The British set in for a siege, but to their great surprise, discovered that Washington had pulled off a quiet and orderly escape.  Rebel fortifications came under British control and James Clarkson remained garrisoned there for several months.

In December of 1776 the 54th Regiment of Foot joined in a British force that set out to take possession of Rhode Island.  The long Rhode Island coastline and sizable harbor at Newport would be a helpful prize.  On 7 December 1776, “83 ships and transports carrying some 6000 British soldiers sailed into Narragansett Bay . . By the time the British arrived, about half the population of the island had fled.  With virtually no opposition, the British captured Newport . . The British held Rhode Island for nearly three years. . “ (Rhode Island in the American Revolution; An exhibition from the Library of the Society of the Cincinnati)

James Clarkson was once again settled into garrison life, this time around Newport Rhode Island.  Life was generally relaxed.  Soldiers were invited into the homes of local Tories, and often won the confidence of the general populous.  But, outside of the town the rebels kept things stirred up, and British regiments were called out for service in surrounding camps. In April of 1777 the 54th Regiment of Foot joined in a series of raids and skirmishes in nearby Connecticut, including the Battle of Ridgefield.

We don’t know what might have occurred in early July of 1777, to incite James Clarkson to desert his post.  Researcher Don Hagist gives this helpful insight:

According to the muster rolls of the 54th Regiment of Foot, he [James Clarkson] deserted from Rhode Island on 18 July 1777. A British officer even made note of it in his diary: "18th [July 1777]... A Soldier of the 54th deserted last night. The Rebels send over some people to the Necks almost every evening about Sunset. They do this principally to induce our men to desert, by shewing them how easy it is for them to get off." If you look at a map of Rhode Island, focusing on the largest island in Narragansett Bay, you'll see that the northern end of the island is very close to the mainland - these are "the Necks" that this officer refers to.

What happened next for James Clarkson is a mystery!  About three hundred miles, and ten weeks passed between his July 18th desertion and a “passport” that was issued to him on the 29th of September 1777.

Headquarters, Rawlings Mill, Sept 29, 1777; Permit James Clarkson, a deserter from the British army, to pass from hence to Reading[Pennsylvania] to find employment.  He is by trade a weaver.  James Pickering, Agent

No doubt, this ten week period was the great adventure of James Clarkson’s life.  I am wondering where to begin searching for clues.

James Clarkson eventually settled in Essex county Virginia, where he resumed the weaving trade, married and raised a family.  We do have some evidence that he kept up with his English family by letter, but it is doubtful he ever returned to England.


As I was researching on the internet in preparation for this blog post, I came across some rich and helpful resources written by Don N Hagist, “an avid historical researcher [who] has spent much of his life studying and researching the history of the American Revolution, focusing on the British soldiers who served in America during that war.”   If you want to give further consideration to James Clarkson’s life in the British Military, I highly recommend Hagist’s blog, British Soldiers, American Revolution.  Don’t miss his post titled, Employed soldier: John Hopwood, 54th Regiment.   The comments following the post include mention of James Clarkson.  I am looking forward to reading Don Hagist’s recently published book also titled, British Soldiers, American Revolution.

Another delightful resource is a collection of photos by Frank Cabral, housed at Flickr, and titled, 54th Regiment of Foot:  Redcoats & Rebels 2013 at Old Sturbridge Village.

For more details on James Clarkson, visit his page at the Family Stories website.


And the people murmured against Moses, saying, What shall we drink? . . . And they came to Elim, where were twelve wells of water, and threescore and ten palm trees: and they encamped there by the waters.  Exodus 15: 24 and 27

The Biblical Elim was an oasis in the desert, a place where God showed his compassion to the thirsty refugees traveling out of Egypt, toward the Promised Land.  When the Fry family built their home in what was then Orange, or perhaps Culpeper county Virginia, they may have been looking toward God’s provision in an oasis.

Two plantations are attributed to Joshua Fry in the beautiful countryside surrounding the city of Charlottesville Virginia.  Elim, located near the community of Locust Dale is about thirty-five miles north and east of Charlottesville, while Viewmont is ten miles south of Charlottesville.  Viewmont was probably built and occupied by the Joshua Fry family about 1744, when they moved west from Essex county Virginia to Albemarle county Virginia.  Elim was constructed sometime between 1745 and 1766.  Opinions differ on whether it was the home of Joshua Fry, or his son Henry Fry (my 5x great-grandfather).

Henry Fry was married to Susan “Sukey” Walker in 1764, and Elim was the home where they raised their large family.  The home remained in the hands of descendants (the Lightfoot family) into the early 1900s.

The plantation was patented in 1726 by Col. Joshua Fry, a member of the House of Burgesses and professor at William and Mary. Col. Fry and his partner Peter Jefferson, father of Thomas Jefferson, surveyed and drew the first official map of the area known as Virginia. Fry commanded the Virginia Militia at the start of the French and Indian War, with George Washington as his second in command. After Col. Fry died [1754] from injuries sustained in travel to battle, Washington assumed command of the forces and “locals” say Washington encamped here [Elim] for about a month to pay tribute to Fry’s widow and children.

Originally named Elim, the manor was enlarged in 1766 by Joshua’s son, Henry Fry. (He is buried in the family cemetery located in the field behind the house.) His lifelong friend, Thomas Jefferson, visited here often, as did General Lafayette.  William Wirt, famous 18th Century American lawyer and counsel for the prosecution against Aaron Burr in 1807, spent much of his youth here. At that time, the plantation encompassed more than 3,000 acres.

During the Civil War, the mansion housed a Union official, Col. Baynard.  Numerous important Civil War battles were fought near the property, which is only 4 miles from Cedar Mountain, site of one of the war’s largest and fiercest cavalry battles.  Local historians believe the Battle of Cedar Mountain actually began at Meander’s front gates.

The property name was changed to Meander in the early 1900s by owner George Shearer, who maintained the property as an estate for his daughters, Judith and Julia. They lived their entire adult lives here, and as noted breeders of horses, cattle and dogs, the colorful, locally-storied sisters are credited with introducing Whippets to America. The Meander Whippet still sets the breed standard.

Suzie Blanchard and Suzanne Thomas bought the property in 1991 with the specific intentions of converting it to its current status as a 10-room Virginia wine country inn. A working agricultural property thoughout its history, the land continues to be farmed for hay, corn and soybeans, as well as a small vineyard producing cabernet franc, petite manseng and cabernet-norton hybrid wine grapes.


For more details on Joshua Fry or his son Henry Fry, visit their individual pages at Family Stories, pamgarrett.com.
And, be sure to visit The Inn at Meander Plantation website.