Bazil Brooke Edmonston plays a major role in My Own Edmonstons and a Few Others, the family history published by Charles Ninian “Chuck” Edmonston in 1971.  A remarkable gentleman with a large family, and even larger heart, Bazil Edmonston's entertaining and abundant correspondence, so painstakingly gathered by Chuck Edmonston, gives considerable insight into the entire Edmonston family line. 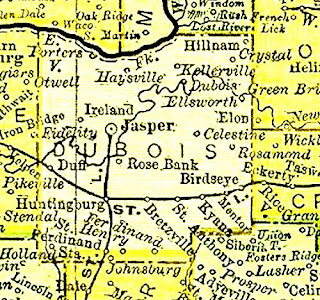 Bazil Brooke Edmonston is my 5xgreat-grandfather.  He was born in Prince Georges county Maryland 14 May 1766 and died January 1841 (about age seventy-five). As a young man he migrated first to North Carolina (Rutherford, Burke and Buncombe counties) and then to Indiana where he first set up on the White River in Harbison township, and later settled closer to the future town of Jasper in Dubois county Indiana. Bazil Brooke Edmonston was married to Hannah Rose about 1785 in North Carolina.  The story of her ancestry will be addressed in a future blog post.  They were the parents of a number of interesting children, including my own 4xgreat-grandfather, William Edmonston who married Elizabeth Royce.

Bazil Brooke Edmonston, his wife, and a number of his children made the move from North Carolina to Dubois county Indiana in 1818, the same year the county was formed.  They were among the early settlers of this area.  Here are a few snippets from a letter written by Bazil Brooke Edmonston in July 1819, concerning his settlement in Indiana:

Well Beloved Children:
. . . I have wrote to you before concerning my moving to the River on the 23 November and has cleared 8 acres (of) first rate land in the State and in corn and it grows among the first rate water. I have built a snug cabbin, waggon shed and stabel etc. I saw then I was not able to make two sets of buildings . . .  And I have 2 acres first rate wheat turning ripe . . .  There is a quarter joining me (which) I intend to enter at the first opportunity as it is suitable to this place and if either or both of you intends coming here you can't come too soon, for land is entrying very fast on the other side of the Patoka River where there was no settlement when Ninian was out. We have sent on a petition to the Board of Commissioners for a new township with forty-nine odd signers so you may know how fast our county (several words missing) . . .

The family correspondence gives an interesting picture of the life and times of Bazil Edmonston and his family.  It is unfortunate that the letters, found spread around the country by Chuck Edmonston, don't cover a larger period of time. Much of what Chuck Edmonston gives in his book is paraphrased and not quoted. We mostly have a picture of Hannah Rose Edmonston as a very sick woman and then Bazil Edmonston as a widower, concerned with all the affairs about him and especially the affairs of his children. When he reports Hannah's death, 6 March 1831, he also says he has been appointed postmaster for the new town of Jasper which was made the seat of Dubois county Indiana in place of Portersville. He was building a new house. Bazil Edmonston was one of the first judges of the county Probate Court and served until his death in January 1841.

Email ThisBlogThis!Share to TwitterShare to FacebookShare to Pinterest
Labels: Edmonston

No one is completely clear on the origins of the Czech people, but they were a tribal group that settled in central Europe about 500 ad.  They had an association with the Boii tribe, after which the area of Bohemia takes its name, and they were closely related to the Slavic people who settled in the same area about the same time.  They were associated with the Great Moravian Empire of the 800’s and then with the Bohemian Empire that followed in the 900’s.  Bohemia grew to be quite large and was a self-governing state of the Holy Roman Empire during the Middle Ages.  Prague was the empire’s leading city.  Many German craftspeople and merchants moved into the Bohemian towns.

In the 1500’s the Austrian Hapsburgs took control of Bohemia and Hungary.  Bohemia remained semi-independent and many of the nobles embraced the new Protestant Christian religion.  In the 1600’s a group of Czech Protestant nobles revolted against the Catholic Hapsburg rule by electing a Protestant king. The Czech revolt touched off the Thirty Years War. The Czech nobles were defeated by the Hapsburgs and lost self-rule.  Their empire was divided into three provinces: Bohemia, Moravia and Silesia.  The Habsburgs forced the Czechs to adopt the German language and culture, and Catholicism became the state religion. 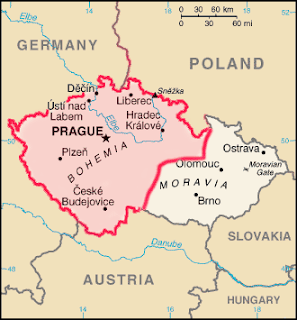 In the 1700’s, under Austrian-German influence, Bohemia and Moravia began industrial development and many Czech peasants moved from their farms to the urban areas.  A differentiated society of industrial workers, middle class and intellectuals formed.  About the same time, many Czechs began to promote a rebirth of the Czech language and culture.  The growth of Czech national feeling led to significant cultural and political gains during the late 1800’s.  But, life in Bohemia and Moravia remained hard for the common man.  Most had small plots of land for subsistence farming.  News of possibilities in the “New World” was enticing.  My husband’s family migrated from Bohemia and Moravia to America during the 1865 – 1890 period.  We don’t know exactly what induced them to set out for America, but researchers have concluded that the primary motive for Czech immigration was economic improvement.

It was many years after the ancestor’s flight to America that the nation of Czechoslovakia came into existence.  Following WWI in 1918, the Czechs and Slovaks were politically united as Czechoslovakia but the nation was quickly swept up by Hitler’s Germany.  Following WWII in 1948, Czechoslovakia was firmly placed in the Soviet orbit and experienced decades of communist control.  With the collapse of Soviet authority in 1989, Czechoslovakia regained its freedom and in 1993 the country split into the Czech Republic and Slovakia.  In our lifetime, freedom from communism has allowed American Czech descendants to return to the “homeland” to learn more of their heritage. 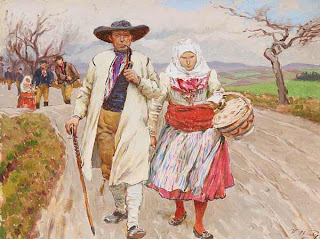 Over the past twenty years my mother-in-law, Aline Jewel Svejkovsky Garrett, has been gathering and compiling the stories of her ancestors who came from Central Europe to America during the mid-nineteenth century.  Her work will be a blessed legacy to future generations of her family.  To date she has put together significant notebooks on her Svejkovsky and Swanda families and she is currently updating the work of cousin Berniece Lebeda Brown on the Soper family.  These are very large families today and Aline’s notebooks are full of stories and photographs that she has gathered from her extended family members.  She retains the original notebooks and has made copies for each of her three sons.

In 2003 I compiled a simplified version of her work in a small booklet to share with “the grandchildren”.   Now I am expanding on her work, adding it to my database website, Family Stories pamgarrett.com.  The four primary families that are followed are Svejkovsky, Swanda, Soper and Fridrich.  All of these families are Czechs who came to America from the provinces of Bohemia and Moravia in the Austrian-Hungarian Empire.   Generally speaking, they followed a typical Czech migration route in America – beginning near Cedar Rapids Iowa, moving on to South Dakota and Nebraska, and finally participating in the Oklahoma Land Run and settlement.

The stories that Aline has gathered have come from many relatives who have been willing to share the fruits of their labors in exploring family history.  I appreciate the opportunity to draw on the work of others who have researched and written down stories.  Thanks to Aline Svejkovsky Garrett, William “Bill” Svejkovsky, Robert H Svejkovsky, Allie Swanda Svejkovsky, Anna Fridrich Stransky, Larry Nespor Swanda, Berniece Lebeda Brown, Olga Swanda Svejkovsky, and many others.

Over the next few months on this Blog, I plan to post a little “Czech” history, and tell the family sagas of “coming to America”.  There are also some great stories to share about, female homesteading, early day saloon-keeping, the first Oklahoma City police force, and life in a “Soddy”.

Wordless Wednesday: Answering the Call of the Open Road in 1925 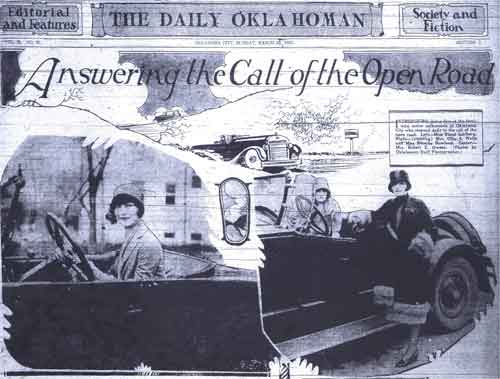 Blanch Bernice Rowland was born in 1905 in Galveston, Texas, the daughter of Robert Solomon Rowland and Laura Lorena Nichols.  During her childhood, she moved with her family to Oklahoma City.  She was married to Albert Luther Clarkson in 1927.  Blanch Rowland Clarkson is my grandmother.

There is evidence that James Jones served in the Civil War.  He and his wife “Phobe” appear on a list of ‘Families of Indigent Soldiers in Hempstead County Arkansas, 1862’.  There are three Jones men appearing on a list for Company C of the 24th Arkansas Infantry – Gabriel Jones, JH Jones, and W Jones.  I suspect, but am not certain, that JH Jones is our James  Jones (probably James Henry Jones), and the others are his two brothers Gabriel Jones and William Jones.  I hope to explore the Civil War Service of the Jones family in Arkansas in a later blog post.

My question for now . . . Did James Jones die during service in the Civil War?  We have no further records for him following the 1862 listing of Families of Indigent Soldiers.  There is some disagreement over the date of birth for his youngest son, Isaac Jones.  Sources give his birth year in 1863 and 1866.  I have been unable to locate the Jones family in the 1870 census, but “Febey” Jones does appear as a widow in the 1880 census of DeRoan township, Hempstead county Arkansas.

This wonderful photograph of Phoebe Mouser Jones and her five children appears in LaFrona Foshee Mouser’s 1978 book, “A Genealogy of the Mouser Ancestry, Including the Best and other families.”  A copy of this treasured photo was shared with my mother by Roy and LaVeta Mouser of Hope Arkansas.  I am not absolutely certain that I have labeled the children in the photo correctly.