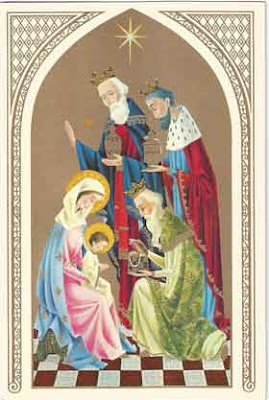 Thinking of Christmas Past, I looked through my grandmother Maa’s (Edith Tanner Hutchison) Christmas card collection and came across this lovely card.  It was sent by Isabel Crim Martin and her husband Willis Martin to Robert “Bob” Hutchison and his wife Edith Tanner Hutchison in 1969.  The relationship – Isabel Crim was the daughter of Palmer Crim and Robena Hutchison Crim.  And, Robena Hutchison Crim was the sister of my grandfather, Robert “Bob” Hutchison.  That makes Isabel Crim Martin my first cousin once removed.  In the personal message Isabel mentions the death of “Baba”.  This is my great-grandmother Isabel Wilson Hutchison, who died 11 December 1968, at the age of 101.

A Blessed Christmas to all,
Pam Garrett
Rejoice, Christ our Savior is born!! 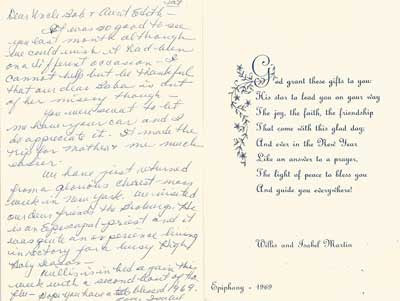 It was so good to see you last month although we could wish it had been on a different occasion.  I cannot help but be thankful that our dear Baba is out of her misery though.  You were sweet to let me have your car and I do appreciate it.  It made the trip for mother and me much easier.  We have just returned from a glorious Christ – Mass week in New York.  We visited our dear friends the Broburgs.  He is an Episcopal priest and it was quite an experience living in the rectory for a busy High Holy Season.  Willis is in bed again this week with a second bout of the flu.  Hope you have a blessed 1969.
Love, Isabel

Card Text:
God grant these gifts to you: His Star to lead you on your way; The joy, the faith, the friendship;That come with this glad day; And ever in the New Year; Like an answer to a prayer, The light of peace to bless you; And guide you everywhere!
Willis and Isabel Martin
Epiphany 1969
Photo:  This card was published by Washington Cathedral in Washington DC.  Visitation of the Magi by P Cloes, contemporary, Belgian.

Jane Faulds: Who is your Daddy?


Jane Faulds, my great-great grandmother, was born in 1836 in Stewarton, Ayrshire Scotland.  Her location and year of birth is consistently born out in census and marriage records.  She grew up in Stewarton, where her father was a tailor.  In 1855 she married my great-great grandfather, John Hutchison, and they settled in his neighboring community of Springside in Dreghorn, Ayrshire Scotland.  I’ve experienced tension in trying to discover the identity of Jane Faulds’ parents.  For me, two different sets of parents step forward and try to claim the title.  I want to look at both here.

Set 1:  John Faulds and Jane Thompson
I should begin by saying that this set is the most likely choice for parents of my Jane Faulds.  The reason is simple – because she names them as her parents in both of her marriage licenses.

Marriage Register of County Ayre, Scotland; 1855; Parish of Munchline
2 Feb 1855, of Dreghorn, after Banns, According to the Rites and Ceremonies of the Established Church of Scotland -John Hutchison of Dreghorn; 23; miner; born Munchline [marries] Jean Faulds of Stewarton; 19; born Stewarton; parents of John Hutchison are Robert Hutchison (weaver) and Margaret Hutchison; parents of Jean (Jane) Faulds are John Faulds (smith) and Jean Thurndon/Thomson; married by John C Jamieson, minister of the Parish Church at Dreghorn.

Marriages Parish of Dreghorn, County of Ayre 1875
William Bird, coal miner, bachelor, age 29 of Dreghorn and Jane Falls (Faulds) widow 39 of Springside; married 27 Jul 1875 at the Croft Hotel, Dreghorn after Banns according to the forms of the Established Church of Scotland; parents of William Bird are John Bird (coal miner, deceased) and Mary Torrance; parents of Jane Faulds are John Faulds (tailor) and Jane Thompson; by James Milroy, minister.

As I read these marriage licenses they suggest to me that Jane Fauld’s parents are living in 1855 and 1875 (they are not noted as deceased).  The first license states that Jane Faulds was born in Stewarton (1836) and was “of Stewarton” when she married in 1855.  This suggests (without certainty) that Jane grew up in Stewarton, and from that I assume that her parents were residents of Stewarton (at least in 1855).  During the 1800’s there are lots of people with the name Faulds (Foulds) in the county of Ayr; and more specifically there are many by that name in the community of Stewarton.   But, my research is frustrated by the lack of evidence of a John Faulds, wife Jane, and daughter Jane born about 1836.  I have searched the plentiful records of both Stewarton and the larger county of Ayr.  Where are they?

Set 2:  James Faulds and Jane Reid
James Faulds and his wife Jane Reid are very visible in the Census and Parish Records of Stewarton, Ayrshire Scotland.  Their marriage appears, as do the births of their children, and they are clearly identified in census records.  During my Faulds family research they grabbed my attention because they had a daughter, Jane Faulds (Foulds), who was born 29 November 1835.  The parents, James Faulds (Foulds) and Jane Reid are identified in her birth and christening records.    This Jane Faulds also appears with her parents in the 1851 Census for Stewarton, Ayrshire Scotland.

For more details on JaneFaulds, visit her page at FamilyStories, pamgarrett.com.  A blog posting on Jane Faulds’ son, Robert Hutchison, will appear on this blog soon.  It includes more clues related to Jane Faulds. 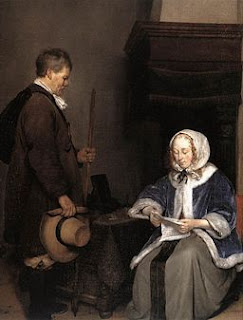 Charles Ninian Edmonston, author of My Own Edmonstons, collected a number of family letters.  These letters are briefly paraphrased, or quoted from, in his book.  I am placing this Beatty family letter here in its entirety.  It was written 10 October 1770 to Mrs Bridgett Beatty of Wilmington [North Carolina], care of Archibald McLaine, Esq in Philadelphia, from her brother, John Day.  A note is appended to the end of the letter, probably written by Charles Ninian Edmonston, that reads, "A descendant of these Beattys was Maria Beatty who married Thomas Benton Edmonston, son of Ninian Edmonston.  She died 11 April 1898, no record of the date of her birth.  Married 20 April 1876."  Thomas Benton Edmonston is my first cousin five times removed.  The original letter was in the possession of JN Himes of Haywood county, North Carolina, probably in the 1960's.

By a letter from Mr Archibald McLaine I received the Malacholy acct of the death of my dear old Uncle and of my brother's Beaty.  I cannot easily describe the shock it gave me.  Your situation appears to me truly distressing and afflicts me the more as I cannot properly quit this place in order to [be of] any assistance for I am connected in business with a man who knows nothing of it and of course the whole would stand still were I to go to you.  Besides this I have another consideration equally interesting.  My own affairs have been greatly embarrassed these few years past and I have waded through a sea of usury and apprehension in order to preserve a valuable estate to my family which I now find will be impossible as no person has ever lent me money on it but with a view to get my estate for a trifle which has drove me to the necessity of throwing myself out of the one usurer into that of another and as there is no one in Novascotia able to purchase my estate I am necessitated to dispose of it by a lottery which is to make its appearance next week. Thus situated, my dear sister, I cannot go to your assistance without injuring my family more than I can do you service.  I now write to Mr McLaine respecting your affairs.  Let me request it of you to exert yourself and be industrious to bring your matters to a speedy conclusion for the endeavors of your best friends will not succeed unless you stir yourself.  Let me beg of you to avoid lawsuits; they have been destructive to our family.  I would further recommend it to you not to leave N. Carolina until you are finally settled otherwise depend upon it they never will, at least I never could learn that any person could ever get their matters closed in that province in their own absence.  When you can with advantage to yourself and safety of your property leave that country and would choose to come to this province my house and a hearty welcome from all thats in it is at my dear sister's service.  Mrs Day cincerely joins me in condolance to you.  I am, my dear Bridgett, yr very affectionate brother, John Day.

Comments by Blanche Aubin Clarkson Hutchison, drawn from "My Own Edmonstons and a Few Others", by Charles Ninian Edmonston, 1971.

For more details on MariaBeatty, visit her page at FamilyStories, pamgarrett.com.  If you would like to read more about the Postal Service in 1770’s America, you might enjoy Benjamin Franklin: Man of Letters.

Our Family Stories Database is Growing 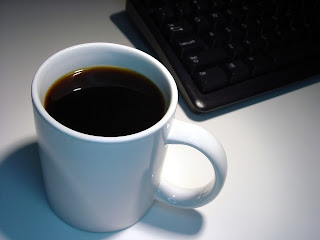 This Family Stories Blog was established to share with family, friends and fellow genealogists some of the stories I have gathered during nearly thirty years of family history research.  It links with my companion website, Family Stories, pamgarrett.com, that houses my genealogy database and an extensive collection of documents, notes, biographies, and photos.  I’m delighted to announce that my database website is growing!

This week I have added about five hundred new family members to my online database, along with significant details about many of their lives.  These are my paternal ancestors and their families: Hutchison, Wilson, Faulds, Tanner, Smith, Jones, Mouser, and Dunaway.  Over the next few weeks I will blog thumbnail sketches on these families and invite you to visit their personal pages on the database website to learn more.

Researching my paternal ancestors has been an adventure.  My great-grandfather, Robert Hutchison, was an immigrant to the United States in 1880.  He seems to have traveled alone, leaving his mother, step-father, siblings, and half-siblings in his birthplace of Ayrshire Scotland.   He worked in the coal mines of Missouri and Oklahoma.  So far, all of my Scottish research has been accomplished online, in libraries, or via books, but I am hanging on to my dream of visiting Ayrshire someday.

My other paternal great-grandfather, Wyatt Tanner, has been harder to track.  With the help of my sleuthing partners (Mom and Dad) I have placed him in his butcher shop in Wapanucka Oklahoma, and then moved him backwards through Texas, Arkansas, and Missouri.  A determined effort finally connected him to parents and a likely grandfather, but earlier ancestry remains a mystery.

I’m excited to introduce these ancestors, and to share a few of their stories.  I hope you will join me for the fun!
Posted by Pam Garrett No comments: