Alexander Boyd and the Boyd Tavern

Between 1766 – 1770 Alexander Boyd purchased hundreds of acres in Mecklenburg county Virginia, where he established his home and store.  During this same time he married the daughter of his adjoining neighbor, Richard Swepson.  Over an extended period of time, Alexander Boyd, along with his father-in-law and brother-in-law, Richard Swepson junior, established the “Village of Mecklenburg Court” that included the courthouse, prison, tavern, mercantile business and their home plantations.

The original tavern building was constructed around 1790, a small single-story structure. It first belonged to the Swepson family, but in 1794 it came into the hands of Alexander Boyd.  He turned the operation over to his sons, Richard and Alexander Boyd.  In 1796 Richard Boyd was granted a tavern license.

During the reign of the Swepson and Boyd families, the tavern likely served a variety of purposes.  Traditionally taverns provided food, drink, and sometimes lodging for both townfolk and travelers.  Taverns usually had a “taproom” where men could gather for food and drink.  There they, “learned current crop prices, arranged trades, heard newspapers read aloud, and discovered business opportunities and the latest betting odds on the upcoming horse races.” (wikipedia)  A variety of alcoholic drinks were served, from imported rum to locally produced hard cider.   In larger taverns there might also have been a second room, of a slightly more gentile design, where women could be included for a meal.

Tavern keeping was a closely regulated business, requiring a license.  Local governments worked hard to insure that their taverns were safe places for people to gather.  They limited what would be served, and who could be served.  They even set prices to avoid gouging.

Boyd Tavern, being located at the county seat, would have provided for the many visitors who would come for county business, or to attend the county court.  Recent historians assert that Boyd Tavern, in its early days, may actually have been the courthouse for Mecklenburg county Virginia.

Answering a dispute related to the tavern, Alexander Boyd claimed he provided, “ . . a table amply supplied with all the meats raised in this part of the Country and a cellar furnished with the liquors of Europe, Africa, and America, and a tavern of nearly 150 feet in length with fourteen rooms and twelve fire places for their accommodations, with stables as good as any in the state . . “

After the “panic of 1819” and the ensuing financial depression, the Boyd family sold off the tavern and surrounding property.  But, the Boyd Tavern story carries forward to this day.  The building has changed dramatically, and it has had a variety of owners, operators and uses.  In the early 1990s the Boyd Tavern Foundation, along with community leaders in Boydton accomplished the task of restoring the tavern.  It now serves as a social and cultural gathering place for the Boydton community and town visitors.

If you would enjoy reading more about Boydton, Boyd Tavern, or tavern keeping in Colonial America, I suggest:
The Life and Times of Boyd Tavern
The Boyds and Swepsons of Boydton
Sons of Liberty Occupations: Tavern Keeper
History Down Every Road, see Mecklenburg County; Boyd Tavern.

Photo:  Boyd Tavern (circa 1900) from a postcard.  This image of Boyd Tavern, along with a number of more recent photos, appears on the History Down Every Road website.  Be sure to visit!
Posted by Pam Garrett 3 comments:


Richard Albert Clarkson was living with the family of his uncle, Joseph Albert Clarkson, when the Civil War began. He was a young man of about sixteen. His primary service during the war was with the 14th Regiment, Virginia Cavalry from Charlotte county Virginia. Many years after the war, RA was asked to share his war recollections.  The first of two letters is addressed to Captain Edwin Bouldin. Captain Bouldin headed RA’s regiment and they remained in touch with each other throughout their lives.  Among other anecdotes, he gives this description of Camp life: 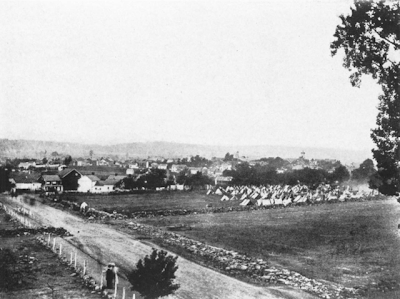 . . . In January ’63 I joined the Company, then in Winter Quarters near Salem, Roanoke co, Va . . our Mess was a large one composed, if I remember right, of your honorable self, . . . Roberts of Drakes Branch, Sam Gaines of Charlotte CH [Courthouse], Ad West of Halifax, McMorris of Dupree’s old store, Sam’l McCargo and myself of Wyliesburg, and the two servants . . . your man (whose name I have forgotten) who always indulged in the Indian war-hoop when he got a little “red eye” ahead, and the Negro Gilas employed by Roberts, McCargo and myself. Guard duty around the camp, and the usual morning and afternoon drill was all that bothered us. The remainder of the time was spent in pleasures and sleep. I had a violin, and Ad West a banjo, -by-the-way, I have never seen his equal as a banjoist since, and we used to almost raise the tent with our musical performances the principal ‘air’ being ‘Git up Liza Jane’. This I believe was your favorite instrumental piece, and we gave it to you till you would often cry, “hold, enough”. The music ended, games were taken up, those who liked cards engaging in the ever continued game of bluff, while others would satisfy themselves with checkers, chess, etc. McMorris and I whittled out of cedar, red and white, a set of chess-men and our occupation, when not on duty, or making music, was wholly chess-playing. All over the camp could be heard the terms, “I see you better” and “I’ll straddle you”, etc. etc. Occasionally Sam Gaines and I who were inclined to be ladies-men would, with your permission, visit the young ladies in Salem, and at Hollins’ Institute. Well do I remember the first time I heard the sweet song “Lorena”. Modest, gentle Miss Margy Logan of Salem sang it for Sam and I, to perfection. Never since, have I heard it as she sang it. Association may have something to do with it, I was captivated, just old enough to fall in love, and vain enough to think all girls loved me.  Alas! I was mistaken in this case, for the other fellow (Sam) made the impression, and I was left.

The second letter is addressed to Mrs Falconer. Her identity is unknown, but the letter suggests that she was collecting Civil War reminiscences. In this second letter RA shares his experience at the Battle of Gettysburg, Pennsylvania.  It’s more sobering tones report the death of his great friend, Sam McCargo:

[july 1 gettysburg] Ewell’s corps occupied the left of Gen Lee’s line of battle, and our brigade of cavalry
was placed on his (Ewell’s) left flank, which Buford’s cavalry tried to turn. ‘Twas here that our Brig Gen Jenkins was badly wounded by the bursting of a shell. I saw him brought off the field. Our ammunition gave out and the Captain of my company, Edwin E Bouldin, ordered me to find the ordinance train. After I returned the fighting in our part of the field became fierce. My mess mate, Samuel McCargo, was wounded and throwing up his arms exclaimed “Clarkson, get me off the field.” I tried to support him but had to call help. Meantime he was shot again, and John Roberts, whom I had called was also shot. His wound however was slight, and in taking McCargo off he (McCargo) received a third wound and finally had to be left in the enemy’s hand, where he died.

These letters, in full, are available under the Feature Articles at Family Stories, pamgarrett.com. See Gettysburg Remembered.  Richard Albert Clarkson is my great, great grandfather. 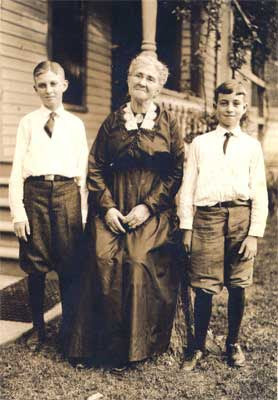 This delightful photograph of Elizabeth Jane “Lizzie” Robinson Clarkson with her grandsons was probably taken about 1920-1922.  The grandsons are Samuel Edwin “Ed” Clarkson jr (born 1908) and William Henry  “Billy” Vick jr  (born 1911).  Elizabeth Jane Robinson married Richard Albert Clarkson in 1868.  He died in 1913, and she lived on as a widow for seventeen years, dying in 1930.   The location of this photo may be Lizzie’s home in Fort Smith Arkansas, or the grandsons’ hometown of Oklahoma City Oklahoma.  Elizabeth Jane Robinson Clarkson is my great, great grandmother.
Posted by Pam Garrett 3 comments: